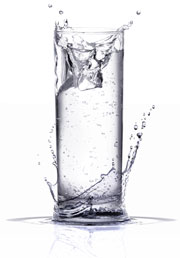 Water is generally classified into two groups: Surface Water and Ground Water. Surface water is just what the name implies; it is water found in a river, lake or other surface impoundment. This water is usually not very high in mineral content, and many times is called "soft water" even though it usually is not. Surface water is exposed to many different contaminants, such as animal wastes, pesticides, insecticides, industrial wastes, algae and many other organic materials. Even surface water found in a pristine mountain stream possibly contains Giardia or Coliform Bacteria from the feces of wild animals, and should be boiled or disinfected by some means prior to drinking.

Ground Water is that which is trapped beneath the ground. Rain that soaks into the ground, rivers that disappear beneath the earth, melting snow are but a few of the sources that recharge the supply of underground water. Because of the many sources of recharge, ground water may contain any or all of the contaminants found in surface water as well as the dissolved minerals it picks up during its long stay underground. Waters that contains dissolved minerals, such as calcium and magnesium above certain levels are considered "hard water" Because water is considered a "solvent," i.e., over time it can break down the ionic bonds that hold most substances together, it tends to dissolve and "gather up" small amounts of whatever it comes in contact with. For instance, in areas of the world where rock such as limestone, gypsum, fluorspar, magnetite, pyrite and magnesite are common, well water is usually very high in calcium content, and therefore considered "hard."

Due to the different characteristics of these two types of water, it is important that you know the source of your water — Surface or Ground. Of the 326 million cubic miles of water on earth, only about 3% of it is fresh water; and 3/4 of that is frozen. Only half of 1% of all water is underground; about 1/50th of 1% of all water is found in lakes and streams. The average human is about 70% water. You can only survive 5 or less days without water.

A boil-water advisory or boil-water order is a public health advisory or directive given by government or health authorities to consumers when a community's drinking water is, or could be, contaminated by pathogens.

Learn how to make an emergency water filter for disaster situations out of some common items.

This method does work and can keep you heathly if clean potable water or a manufactured water filter system are unobtainable.

The Hydrologic Cycle (also called the Water Cycle) is the continuous movement of water in the air, on the surface of and below the Earth.

This cycle is the exchange of energy which influences climate. When water condenses, it releases energy and warms the environment.

90% of the garbage floating in the Earth’s oceans is plastic and less than 5% of all plastic is recycled.

Hydraulic fracturing (sometimes referred to as fracking or hydrofracking) is a relatively new form of natural gas extraction.

The fluids used in the fracking process flow back to the surface, often entering the water table or polluting the drilling area, and sometimes improper disposal of waste water from the wells.

As our technology advances, so do new forms of pollution and contaminants that effect our environment and our health.

Read more about drinking water contaminants and their health effects.

Chlorine has long been recognized as an oxidative agent, meaning that it not only kills the germs in the water supply; it will damage any living tissue with which it comes in contact. And your skin, like the rest of your organs, is living tissue. But that’s not the only problem.

Since the discovery of its health benefits in the mid-1940's, fluoride is often added to the public water supplies of industrialized countries in order to reduce the populations tooth decay, which is especially effective in low income communities, where good dental hygiene may be too costly.

Chromium-6 was found in the drinking water supply of the southern California town of Hinkley and brought to national attention by Erin Brockovich.

The EPA is reviewing effects of Chromium-6 after a recent report brought to light dangerous levels in a number of major US cities.

Giardia is a flagellated protozoan parasite that colonizes and reproduces in the small intestines of humans and other animals, which can cause giardiasis.

Symptoms of Giardiasis usually show after 3 to 4 days, and include gastrointestinal and constitutional problems.

Since a outbreak in 1993 in Wisconson, new attention has been focused on determining and reducing the risk for Cryptosporidiosis from community and municipal water supplies.

How Does It Work?

What is reverse osmosis? What is a 4-Stage system? What are the components in a system? Visit our 'How Reverse Osmosis Works' guide to find the answers.

Also see out list of contaminants RO removes and comparison chart for particle sizes to learn more about reverse osmosis.

What is ultraviolet light? Do I need to filter the water before the UV process? How exactly can light kill organisms?

Visit our 'How Ultraviolet Purification Works' guide to find out how it works.

The typical water softener is a mechanical appliance that's plumbed into your home's water supply system. All water softeners use the same operating principle: They trade the minerals for something else, in most cases sodium. The process is called ion exchange. More...

Step by step instructions on installing replacement cartridges and sanitizing filter housings. It is highly recommended that you clean and sanitize your system once a year.

Need help installing your new RO system, how to perform maintenance, or how often to change your cartridges?

Step by step instructions on making a connection with Quick-Connect fittings. Quick-connect fittings allow you to connect and disconnect tubing without the need of tools.

Step by step instructions on making a connection with Twist and Lock fittings. Twist-Lock fittings allow you to connect and disconnect tubing without the need of tools.

Step by step instructions on making a connection with SharkBite Push-To-Connect fittings. SharkBite fittings allow you to connect and disconnect pipes without the need of using PVC glue or welding copper.

Need to filter water but not sure about the differences between or applications of our systems?

Use our Water Filter Systems Guide to find out which system is best for your filtration needs.

Need to replace your system's cartridges but not sure what type is best for your system?

View our Cartridge Replacement Guide or contact us to find out what you need.

View a chart comparing the specifications of all the reverse osmosis systems we sell on this site. All bladder tanks are NSF certified.

The size of your water softener depeneds on the total grain per day that need to be removed.

This is determined by the number of people in your household, grain per gallon (GPG) hardness and the amount of Iron present in the water.

A micron is a unit of measurement for how small of particles a filter will catch. The lower the micron size, the tinier the 'holes' in the filter cartridge are that allows water to pass through, ranging from 0.1 absolute to 150 microns.

Use our Pore Size Efficiency Guide to find out what micron size to use.

Pleated sediment cartridges remove dirt, rust and sediment from water while providing an increased surface area and longer life. Pleated filters down to 5 microns are washable and reusable.

Use our Pleated Sediment Cartridge Comparison to find the filter cartridge you need.

When traveling around the state or the country in a RV you might not always know where you will be getting the water from or what might be in it. Water that is stored in a RV holding tank will not stay potable for long and can become a breeding ground for algae and bacteria.

Chemicals added to public water supplies, like chlorine, can be harmful to the living cells of plants.

When brewing beer with tap or bottled water, chlorine and chloramine present in the water can combine with malt phenols in the wort to create a compound called chlorophenol, which can give the beer a medicinal taste.

Bottled water requires a lot of resources to manufacture and ship, and costs a lot more than reverse osmosis water.

Use our Bottled Water Cost Calculator to find out how much of an impact you have on the environment.

Chart displaying the sizes of well-known objects and particulates, illustrated in the size of the micrometer (micron).

A chart of RO Membrane performance over a range of temperatures and pressures. Membranes are tested at 65 PSI of pressure and temperature of 77 degrees.

Hard water is the most common problem found in the average home. Hard water is water that contains dissolved hardness minerals above 1 GPG, such as calcium, magnesium and lime.

Water softening fixes this problem without adding any chemicals into your water supply.

Hard water is not as efficient as soft water for bathing, washing dishes, clothes, car & many other uses.

See Also:
Hard Water and Laundering
Water Hardness in the US

Water hardness can affect showering and laundering by making soaps and detergents less effective and leaves a film on your skin.

Find out if you live in an area with slight or very hard water by looking at our hard water map of the United States.